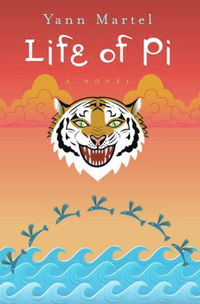 I always thought that "Life of Pi" was an inspirational book.  For that reason, I did not really intend to read it. This is the guy who took months to read "The Alchemist" and did NOT like it!  However, with the news of the new Ang Lee film which had been touted to be "The New Avatar," I wanted to read it before the movie came out.  They had called the book "unfilmable" and I wanted to see why so.  I read "Life of Pi" without really knowing what is was about.

The first part of the book was about a young boy from Pondicherry in India, with an unwieldy name of Piscine Molitor Patel.  After being continually teased about it, he discovered later that it was way cooler to call himself "Pi."  His dad ran the local zoo. Chapters were spent describing the zoo, its animals and why zoos are good for animals.

The narrative then turned to religions.  Chapters were spent to describe three major religions in India - Hinduism, Christianity and Islam.  There was one spectacular chapter where the Patels meet a HIndu brahmin, a Christian priest and a Moslem imam, and the debates that ensued were fascinating to read..

Then there was a sudden turn in the story when the Patel patriarch decide to migrate his family to far-off Canada.  They closed the zoo, brought with them some of their animals on a Japanese cargo ship and set sail.  Upon leaving the port of Manila though, then the real story begins as their ship sinks and Pi was set adrift on a lifeboat with a zebra, an orang-utan, a hyena and an adult Bengal tiger (whom they have named Richard Parker).

From that point up to practically the end of the book, Martel describes how Pi was able to survive several months in the open sea, under the constant threat of the elements, of hunger and thirst, of sharks, and of a tiger on the boat with him waiting to eat him alive.  The battles Pi waged with nature were very graphically described.  There was a long chapter devoted to a strange island of algae and meerkats where the water turns  acidic at night.  For me, that part about the island was the most unusual of the book, it was almost too fantastic.

Pi finally reached dry land in Brazil.  Two Japanese investigators interview him about his ordeal.  At this point of the book, we get an idea of what really happened all those months at sea, or do we?

Mr. Martel is very good in the art of verbal description.  There were several chapters where you felt he was just padding the novel to make it longer.  Do we really need to know so much about the sloth for instance?  I must say that the zoo part was long, but we get to learn a lot about how to run it.  The part about the lifeboat survival, but we learn so much about sea survival technology or animal psychiatry.  The main story is the shipwreck and Pi's survival, and Martel was able to stretch this to 100 chapters.

So, this is not really an inspirational book, is it?   I believe this book is unfilmable the way it was written by Martel.  There have been films about shipwrecks and survivors before, but not described like this.  Now we get word that Ang Lee was actually able to create a film that was better than the book.  The film was described to be like "The Little Prince."  I thought this book was nothing like "The Little Prince" at all now. How Ang Lee did it, now THAT remains to be seen.